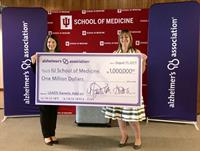 The Alzheimer’s Association Greater Indiana Chapter says it is making its largest-ever investment in research with the awarding of a $1 million add-on grant to the Indiana University School of Medicine. The money is specifically earmarked for research on the Longitudinal Early-onset Alzheimer's Disease Study.

According to the Alzheimer’s Association, LEADS is the largest, most comprehensive study of individuals with younger-onset Alzheimer’s disease. The organization says individuals with the younger onset of the disease have not yet experienced changes in the brain associated with normal aging,

“There is much we still don’t know about how Alzheimer’s develops, especially the younger-onset form of the disease, and this research could hold the key to helping prevent Alzheimer’s, developing effective treatments and even moving us closer to finding a cure” said Liana Apostolova, MD, IU School of Medicine professor and the lead researcher on the study.

The additional funding for LEADS will allow researchers to study the entire genome of all 600 participants to better understand the role of genes in the development of the disease.

“The potential findings from this add-on study are enormous, and we are grateful to the Alzheimer’s Association for making this possible,” said Apostolva.

The school says genetic information will be gathered from participants at sites across the country, but the genetic analysis will take place at IU School of Medicine.

“We are thrilled to be part of this groundbreaking research taking place right in our own backyard,” said Natalie Sutton, executive director of the Alzheimer’s Association Greater Indiana Chapter. “We provide support to individuals with younger-onset Alzheimer’s and their families, and we know how devastating the diagnosis is. It is an honor to support and partner with these researchers who are investigating such an important topic.”

Sutton says the donation was made possible by individual and corporate donations, as well as the organization’s ‘Walk to End Alzheimer’s’ fundraiser.